Before reading this page, you should be familiar with the key concepts of States .

In Corda, states are instances of classes that implement ContractState. The ContractState interface is defined as follows:

ContractState has a single field, participants. participants is a List of the AbstractParty that are considered to have a stake in the state. Among other things, the participants will:

LinearState models shared facts for which there is only one current version at any point in time. LinearState states evolve in a straight line by superseding themselves. On the other hand, OwnableState is meant to represent assets that can be freely split and merged over time. Cash is a good example of an OwnableState - two existing $5 cash states can be combined into a single $10 cash state, or split into five $1 cash states. With OwnableState, its the total amount held that is important, rather than the actual units held.

We can picture the hierarchy as follows: 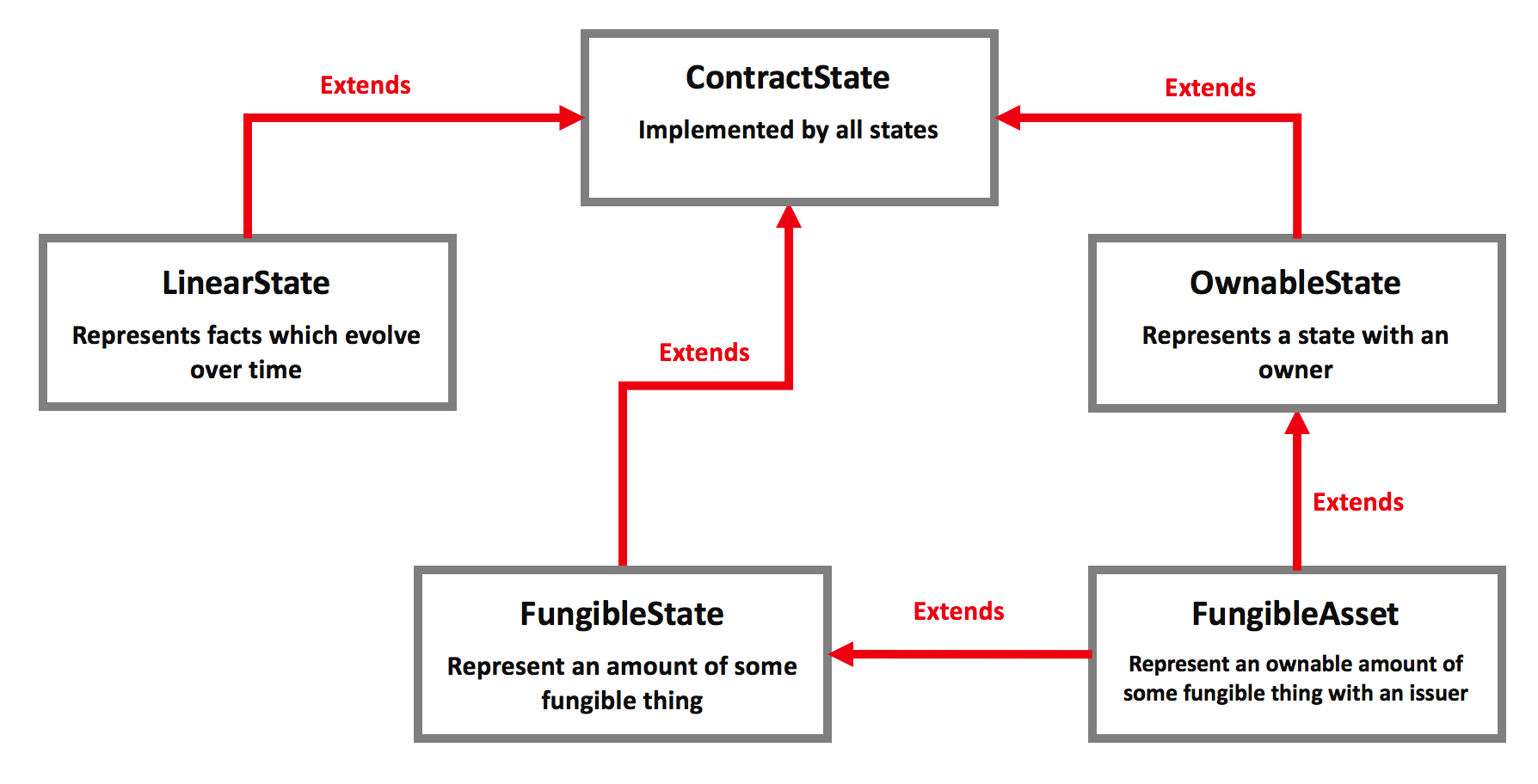 The LinearState interface is defined as follows:

Remember that in Corda, states are immutable and can’t be updated directly. Instead, we represent an evolving fact as a sequence of LinearState states that share the same linearId and represent an audit trail for the lifecycle of the fact over time.

When we want to extend a LinearState chain (i.e. a sequence of states sharing a linearId), we:

The new state will now become the latest state in the chain, representing the new current state of the agreement.

linearId is of type UniqueIdentifier, which is a combination of:

The OwnableState interface is defined as follows:

Because OwnableState models fungible assets that can be merged and split over time, OwnableState instances do not have a linearId. $5 of cash created by one transaction is considered to be identical to $5 of cash produced by another transaction.

FungibleState<T> is an interface to represent things which are fungible, this means that there is an expectation that these things can be split and merged. That’s the only assumption made by this interface. This interface should be implemented if you want to represent fractional ownership in a thing, or if you have many things. Examples:

The interface is defined as follows:

As seen, the interface takes a type parameter T that represents the fungible thing in question. This should describe the basic type of the asset e.g. GBP, USD, oil, shares in company

This interface has been added in addition to FungibleAsset to provide some additional flexibility which FungibleAsset lacks, in particular:

You can also customize your state by implementing the following interfaces:

Beyond implementing ContractState or a sub-interface, a state is allowed to have any number of additional fields and methods. For example, here is the relatively complex definition for a state representing cash:

Whenever a node records a new transaction, it also decides whether it should store each of the transaction’s output states in its vault. The default vault implementation makes the decision based on the following rules:

States that are not considered relevant are not stored in the node’s vault. However, the node will still store the transactions that created the states in its transaction storage.

A reference input state is a ContractState which can be referred to in a transaction by the contracts of input and output states but whose contract is not executed as part of the transaction verification process. Furthermore, reference states are not consumed when the transaction is committed to the ledger but they are checked for “current-ness”. In other words, the contract logic isn’t run for the referencing transaction only. It’s still a normal state when it occurs in an input or output position.

Just like regular input states, the chain of provenance for reference states is resolved and all dependency transactions verified. This is because users of reference data must be satisfied that the data they are referring to is valid as per the rules of the contract which governs it and that all previous participants of the state assented to updates of it.

As such, if reference states assigned to multiple different notaries are added to a transaction builder then the check below will fail.

State pointers use Reference States to enable the functionality described above. They can be conceptualized as a mechanism to formalise a development pattern where one needs to refer to a specific state from another transaction (StaticPointer) or a particular lineage of states (LinearPointer). In other words, StatePointers do not enable a feature in Corda which was previously unavailable. Rather, they help to formalise a pattern which was already possible. In that light, it is worth noting some issues which you may encounter in its application:

When building transactions, any StatePointer s contained within inputs or outputs added to a TransactionBuilder can be optionally resolved to reference states using the resolveStatePointers method. The effect is that the pointed to data is carried along with the transaction. This may or may not be appropriate in all circumstances, which is why calling the method is optional.