The performance network sits behind a firewall that allows incoming connections only via SSH, however the machines within the network can connect to each other on a range of ports (Corda Remote Procedure Call (RPC), Corda peer to peer connection (P2P) and JDBC connections to various database servers are all allowed). 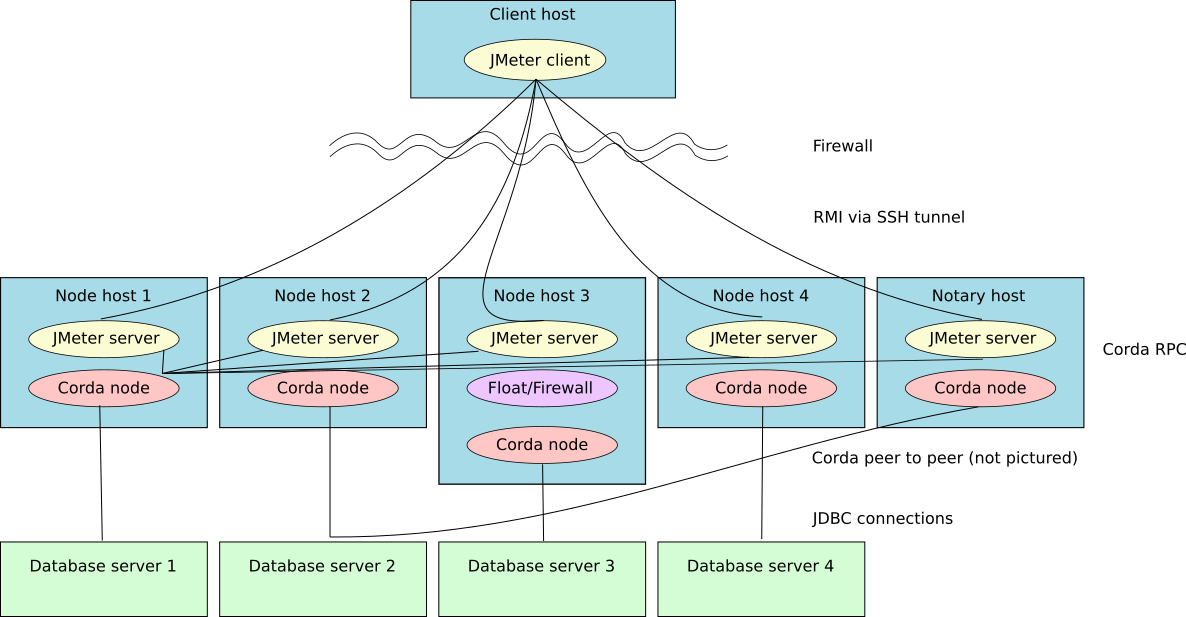 The location of the node’s working directory is important - as nodes use Artemis for peer to peer communication, it is crucial that the Artemis spool directory is on a fast storage solution, e.g. a local SSD. It should not be on a network mount or SAN drive.

There is a separate database for each node - for historical reasons, the notary and node 2 share a database in the, set-up, therefore node 2 gets the lightest load in order to not cause a slow-down by overloading the database. It is entirely possible to run the whole network with one database that has different users/schemas for each node and the notary, however, this set-up might not reach full performance as database throughput becomes a bottleneck.

The default set-up uses Microsoft SQL Server instances as databases, but some testing has been done with Postgres and Oracle 12 databases.

Machines in the Test Network

The initial performance network was set up on a cluster of Microsoft Azure nodes. The following specs have been chosen for the network setup

This set-up has been used to performance tune Corda until Autumn 2018. One of the lessons learned was that performance testing in the cloud has a few drawbacks:

For performance runs, the nodes run with pretty standard configuration. However, there are a few tweaks:

Depending on the type of machines used, it is recommended that the rpcThreadPoolSize does not exceed the number of virtual cores (i.e 2 x number of cores when hyperthreading is enabled), and the flowThreadPoolSize should be around 4 times the number of virtual cores. Depending on other factors like disk I/O, networking, memory etc. tweaking these numbers can yield better performance results.

When using a simple, single node notary, it has the following configuration in addition to the above:

Each node has its own, dedicated database server running Microsoft SQL Server 2016 Standard. Note that the disk write latency and throughput on the database machine are critical for the node’s performance as the Corda checkpointing mechanism means that many checkpoints are written to the database, and then deleted again when the flow finishes. Checkpoints will only be read when a flow is resumed or restarted, which might not happen a lot when running a large number of short-lived flows. Therefore, a read-optimised database server (as e.g. the hosted database instances offered by the big cloud providers) is not ideal for a busy Corda node and will limit throughput. It is recommended to manage the database server manually and optimise for write throughput at least as much as for read.

For the test, JMeter server instances on 4 node machines and the simple notary machine all connect to one node via RPC to drive the tests. A external JMeter client uses the NightlyBenchmark.jmx test plan to run the tests.