Deploying in a testing or production environment

These instructions will guide the user through the UAT or production configuration to deploy the following components. They are intended for firms deploying Corda Enterprise 4.2.

There are alternative approaches to how these components are deployed. For the purposes of this document, the following diagrams represent the topology used.

When deploying Corda Enterprise in a testing environment the Node, Bridge, and Float components should be deployed in a non-HA configuration as shown in the following diagram. 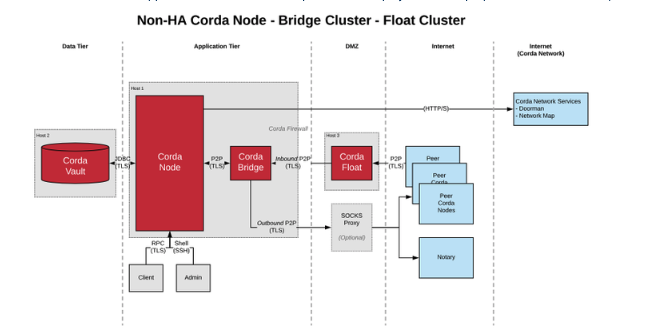 When deploying Corda Enterprise in a production environment, the Node, Bridge, and Float components should be deployed in a high-availability configuration. 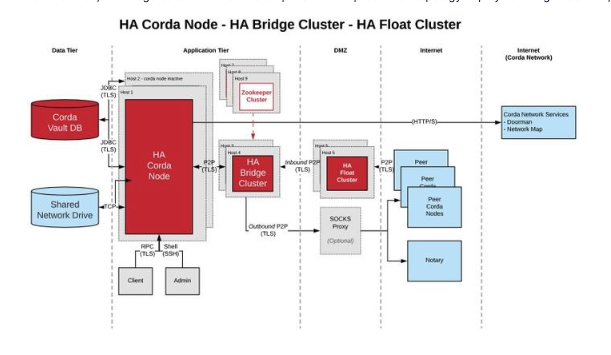 Installing Java 8 on the VM

Java 8 JDK should be installed on your virtual machine. Refer to your internal processes for installation procedures.

These are the configuration files that will be created during the process:

You can find examples of configuration files available here

Once your Node has been started it will contain the following files and directories:

This is a sample node.conf which details a configuration connecting to the Corda UAT Network.

In a bank environment there will typically be several layers of security protecting the firms data. 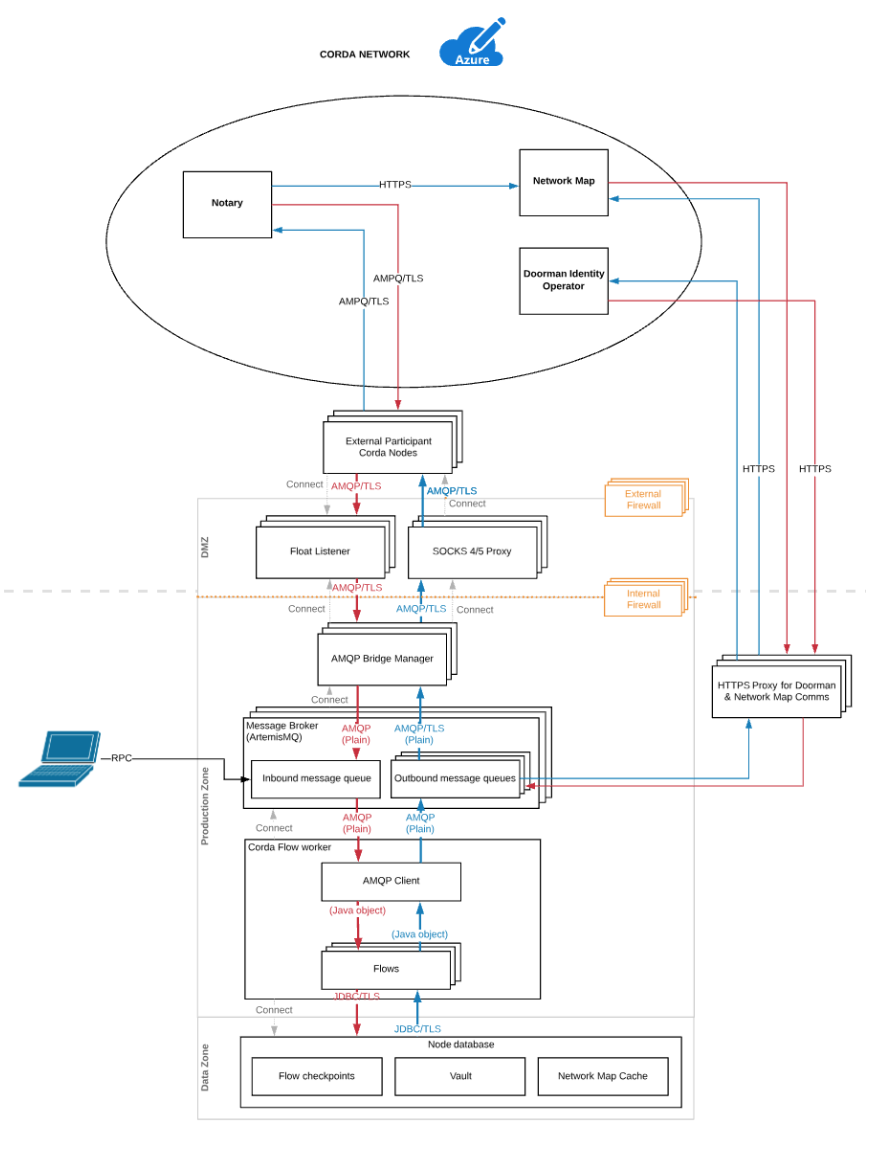 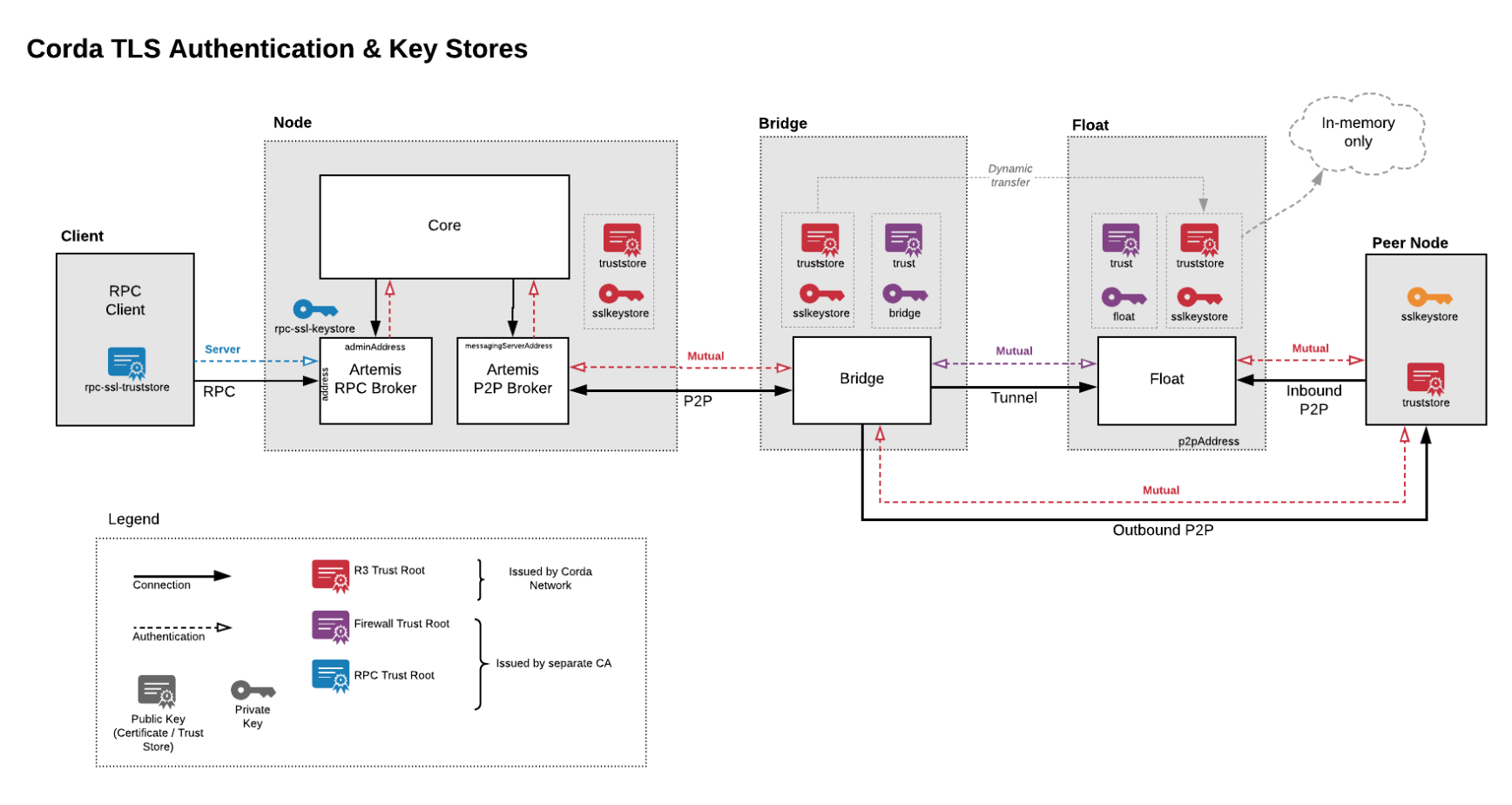 The key thing is to look at this from the perspective of a bank implementing these Corda and Local PKI keys.

truststore.jks - this is the same trust store that the Node is bootstrapped with during initial registration. It contains the cordarootca certificate - this is the public, root certificate of the entire network. It needs to be copied to the Bridge when it is set up. Note that the truststore is also dynamically copied from the Bridge to the Float at runtime (and is held in memory only on the Float). The truststore is used for authenticating Nodes that connect to the Bridge and Float.

This is a sample firewall.conf:

This is a sample float.conf:

A full list of the parameters that can be utilized in these configuration files can be found here : https://docs.corda.net/docs/corda-enterprise/4.2/corda-firewall-configuration-file.html

In Corda 4.x it is possible to for multiple Nodes representing multiple identities to reside behind the same Corda Firewall. Details on setup can be found here : https://docs.corda.net/docs/corda-enterprise/4.2/corda-firewall-upgrade.html

Connections with the Corda Network Doorman and Network Map services (inbound and outbound traffic) will be over HTTP/HTTPS on ports 80 and 443.

Connections with peer Corda Nodes (including Notaries) will happen on a peer-to-peer connection using AMQP/TLS typically in a port range of 10000 - 10099, though port use is determined by the Node owner.

Connections with local applications connecting with the CorDapp via the Corda Node happen over RPC.

Administrative logins with the Corda Node happen via ssh whose port is configured in the node.conf file, typically port 2222.

The following image may be helpful in ensuring alignment between the Node, Bridge and Float configuration files. 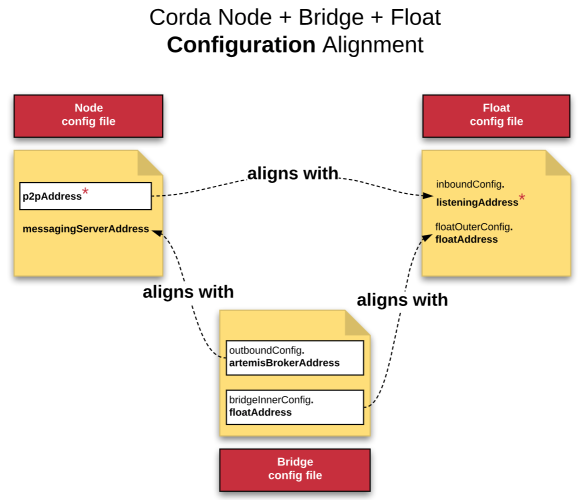 You will likely need to establish proxy servers, one for HTTP connection to the Doorman and Network Map services, and Socks proxy to be used with the Corda Firewall for P2P communication Corda Nodes. Please note the examples below are for demonstration purposes only, it is assumed most financial institutions will already have Enterprise Proxy Server deployments in place and available for use by the Corda Firewall.

Many financial institutions will use an HTTP Proxy Server to monitor connections going out to the Internet. Corda facilitates the use of an HTTP Proxy to access the Doorman & Network map via HTTPS GET requests.

The following is an example of how to set up a Squid Proxy Server and start the Corda Node to point to it as a “tunnel” to connect to Doorman and Network Map.

R3 strongly recommend the use of a SOCKS Proxy in conjunction with the Corda Firewall to access peers on the network for P2P communication.

SOCKS is a general purpose proxy server that establishes a TCP connection to another server on behalf of a client, then routes all the traffic back and forth between the client and the server. It works for any kind of network protocol on any port. SOCKS Version 5 adds additional support for security and UDP. By contrast an HTTP Proxy only understands HTTP traffic.

SOCKS works by establishing a TCP/IP connection with another server on the behalf of your client machine. Through this connection, traffic is routed between the client and the server, essentially anonymizing and encrypting your data and your information along the way.

SOCKS proxies provide an improvement over HTTP proxy in terms of speed of data delivery & by preventing data packets being mis-routed or mislabeled. This provides an overall improvement in terms of stability and avoiding data transfer errors that could otherwise happen.

The additional benefit of utilizing a SOCKS server is that it facilitates organizations enforce security policy and allow applications to reach legitimate external hosts through simple, centrally controlled rule-based settings.