DemoBench is a standalone desktop application that makes it easy to configure and launch local Corda nodes. It is useful for training sessions, demos or just experimentation.

Operating System specific installers are provided as part of Corda Enterprise 4.2 distribution, e.g. for Windows this will be “Corda DemoBench-4.2.exe”.

Run the installer and follow instructions on the screen. Once installer completes it will start Corda DemoBench application: 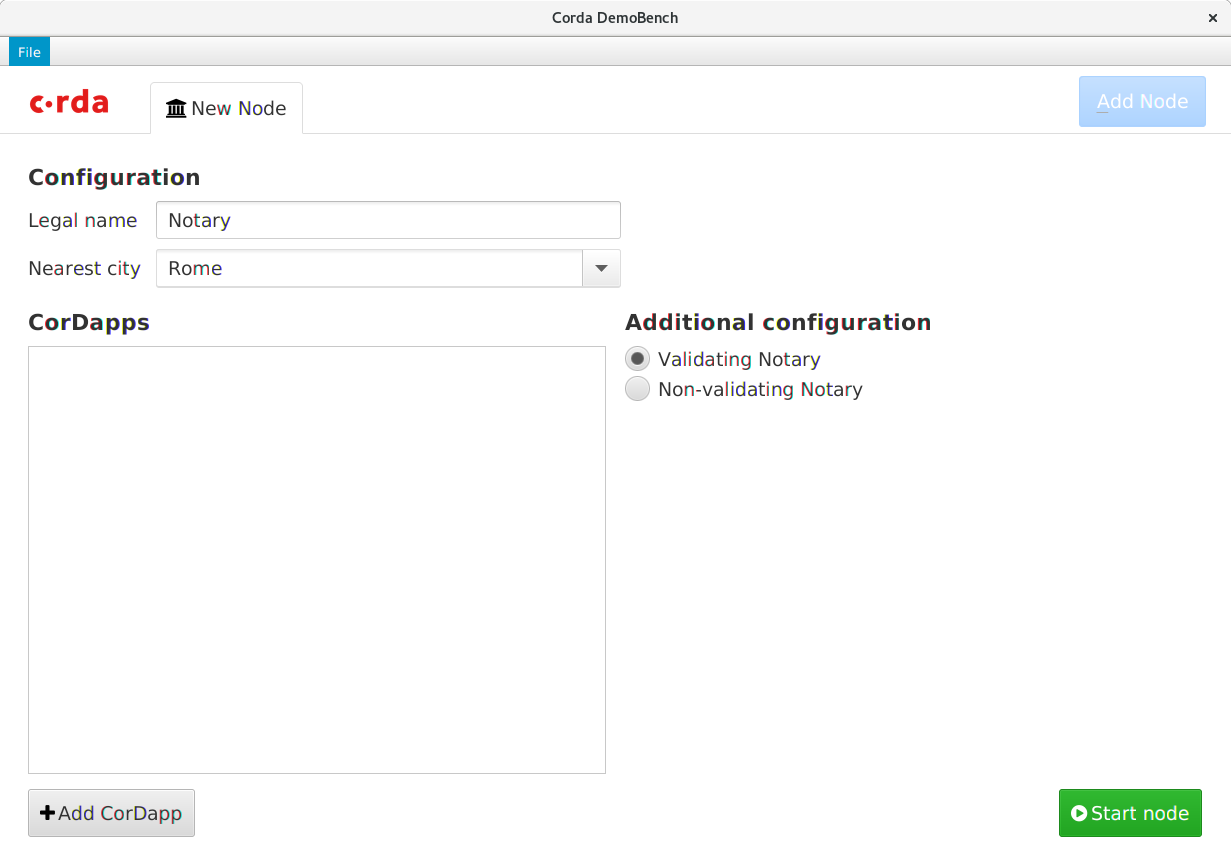 Each node must have a unique name to identify it to the network map service. DemoBench will suggest node names, nearest cities and local port numbers to use.The first node will be a notary. Hence only notary services will be available to be selected in the Services list. For subsequent nodes you may also select any of Corda’s other built-in services.Press the Start node button to launch the Corda node with your configuration.DemoBench launches each new node in a terminal emulator. The View Database, Launch Explorer and Launch Web Server buttons will all be disabled until the node has finished booting. DemoBench will then display simple statistics about the node such as its cash balance. It is currently impossible from DemoBench to restart a node that has terminated, e.g. because the user typed “bye” at the node’s shell prompt. However, that node’s data and logs still remain in its directory.

When you terminate DemoBench, it will automatically shut down any nodes and explorers that it has launched and then exit.You can save the configurations and CorDapps for all of DemoBench’s currently running nodes into a profile, which is a ZIP file with the following layout, e.g.:

When DemoBench reloads this profile it will close any nodes that it is currently running and then launch these new nodes instead. All nodes will be created with a brand new database. Note that the node.conf files within each profile are JSON/HOCON format, and so can be extracted and edited as required.

DemoBench writes a log file to the following location:

Gradle defines tasks that build DemoBench installers using JavaPackager. There are three scripts in the tools/demobench directory of the Corda repository to execute these tasks:

Each script can only be run on its target platform, and each expects the platform’s installation tools already to be available.

You will also need to define the environment variable JAVA_HOME to point to the same JDK that you use to run Gradle. The installer will be written to the tools/demobench/build/javapackage/bundles directory, and can be installed like any other application for your platform.

Mac users should note that the best way to build a DemoBench DMG is with the JetBrains JDK which has binary downloads available from BinTray . This JDK has some useful GUI fixes, most notably, when built with this JDK the DemoBench terminal will support emoji and as such, the nicer coloured ANSI progress renderer. It also resolves some issues with HiDPI rendering on Windows.

This JDK does not include JavaPackager, which means that you will still need to copy $JAVA_HOME/lib/ant-javafx.jar from an Oracle JDK into the corresponding directory within your JetBrains JDK.

Developers wishing to run DemoBench without building a new installer each time can install it locally using Gradle:

Unfortunately, DemoBench’s $CLASSPATH may be too long for the Windows shell . In which case you can still run DemoBench as follows:

While DemoBench can be executed within an IDE, it would be up to the Developer to install all of its runtime dependencies beforehand into their correct locations relative to the value of the user.dir system property (i.e. the current working directory of the JVM):