Here is an example of an update transaction, with two inputs and two outputs: 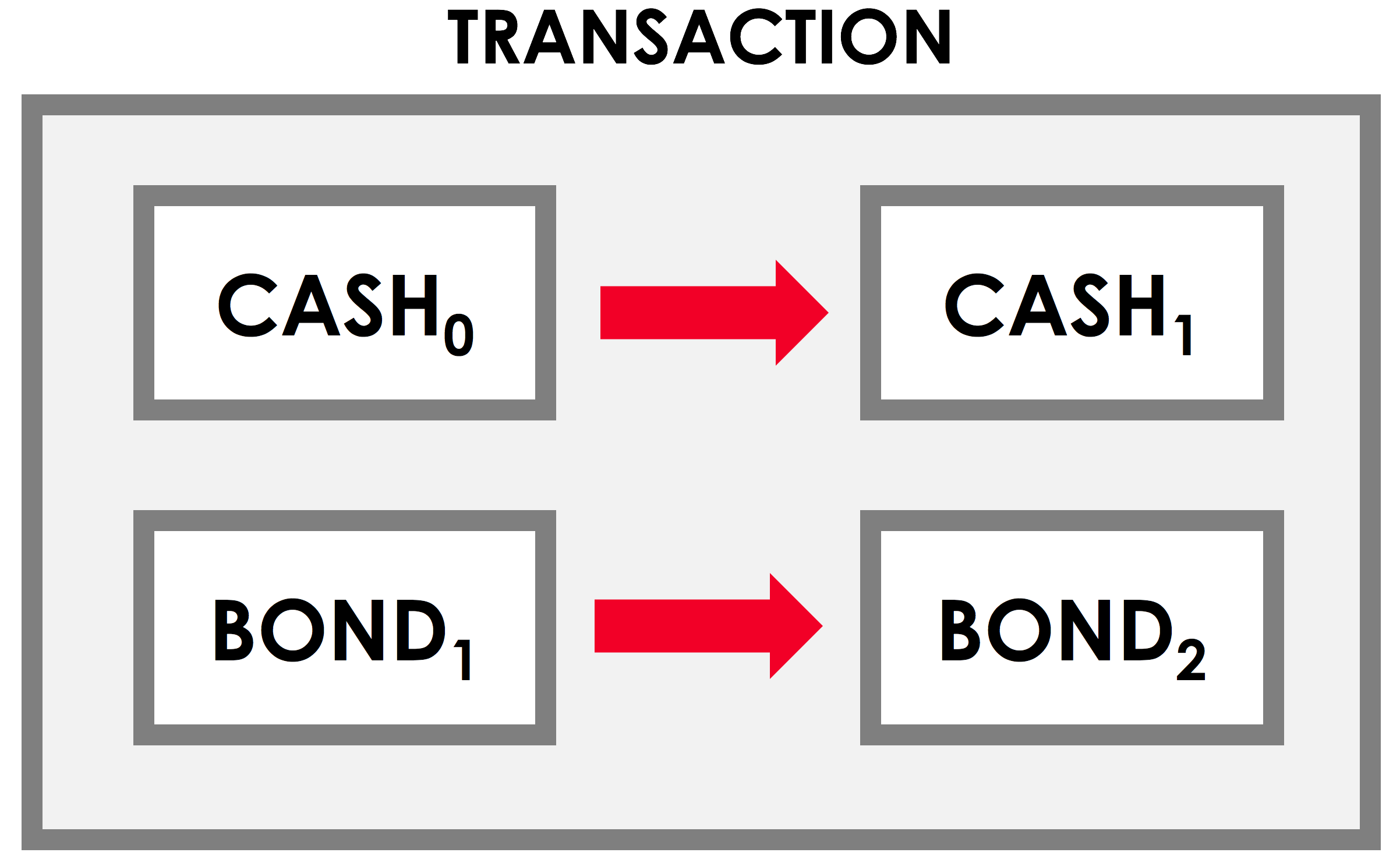 A transaction can contain any number of inputs, outputs and references of any type:

Transactions are atomic: either all the transaction’s proposed changes are accepted, or none are.

There are two basic types of transactions:

These input states references are a combination of:

This situation can be illustrated as follows: 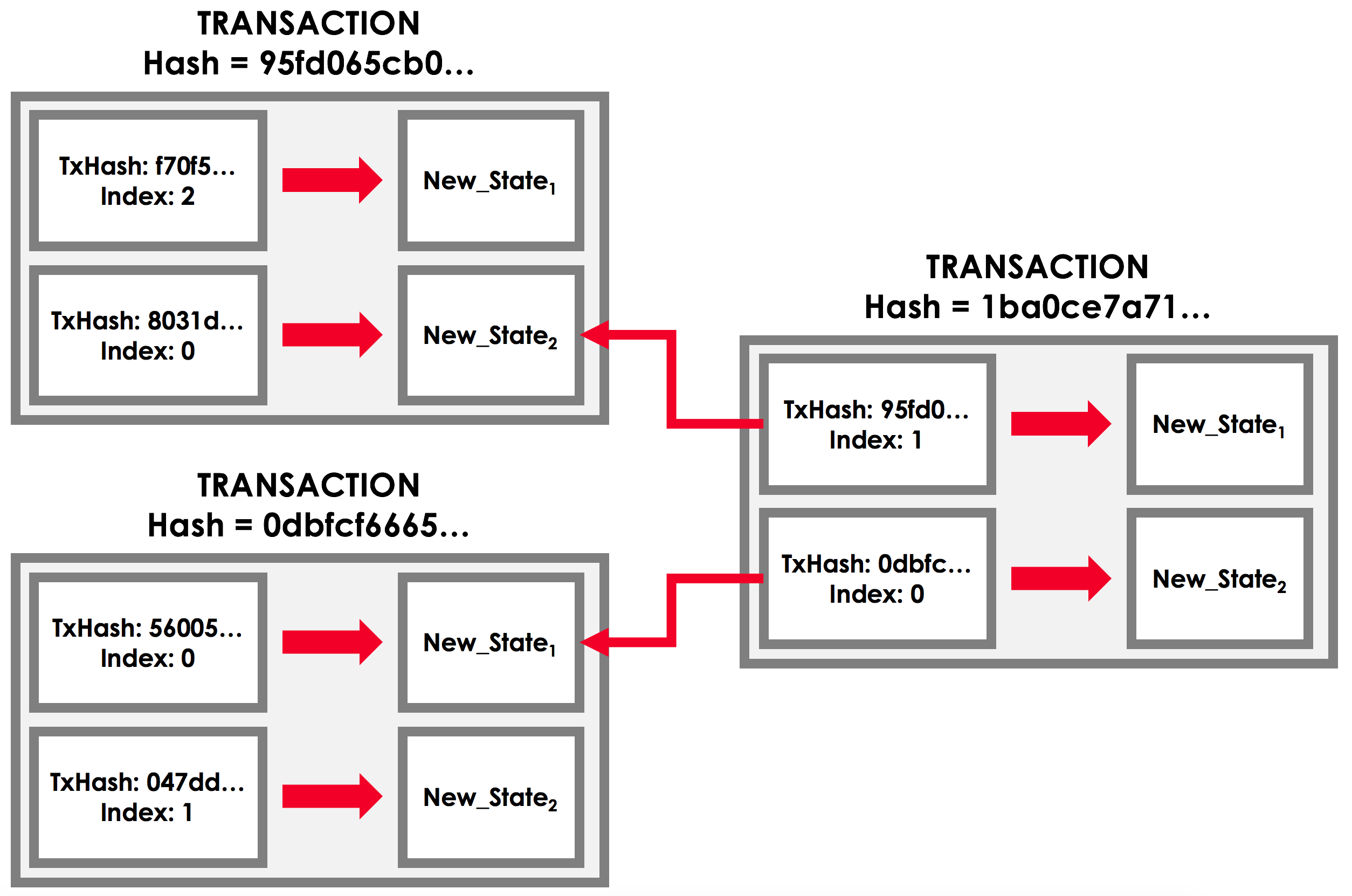 These input state references link together transactions over time, forming what is known as a transaction chain.

Initially, a transaction is just a proposal to update the ledger. It represents the future state of the ledger that is desired by the transaction builder(s): 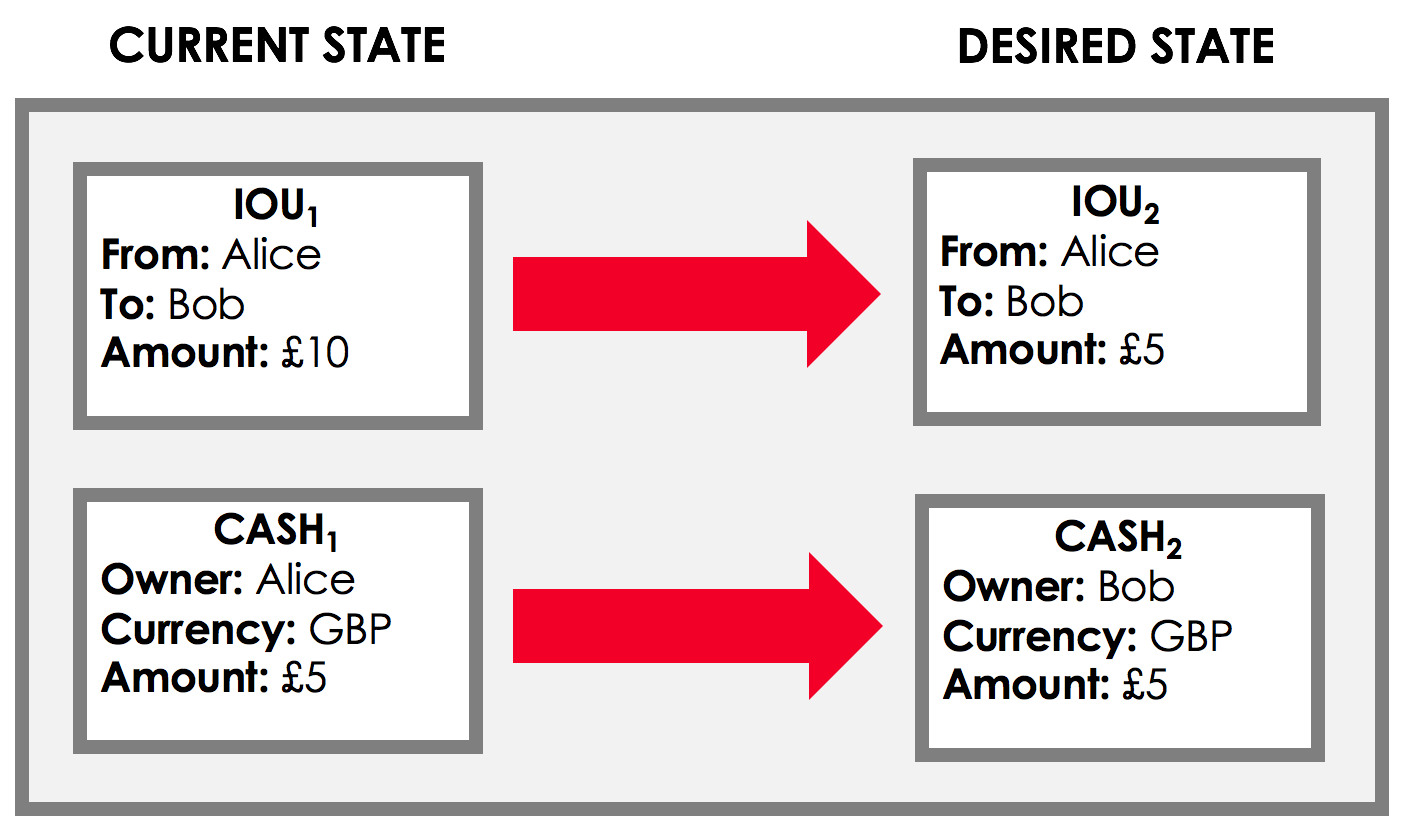 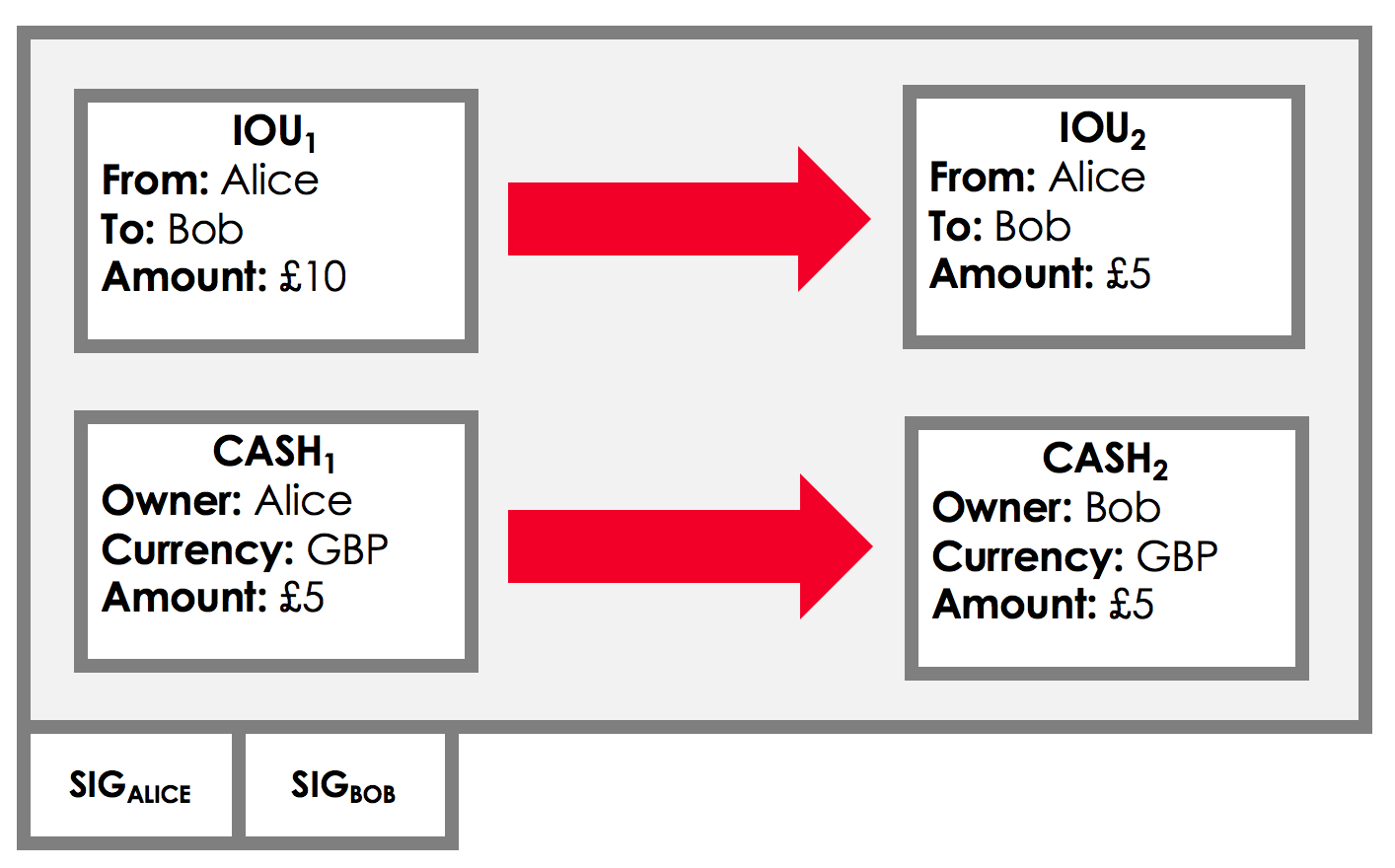 If all of the required signatures are gathered, the transaction becomes committed: 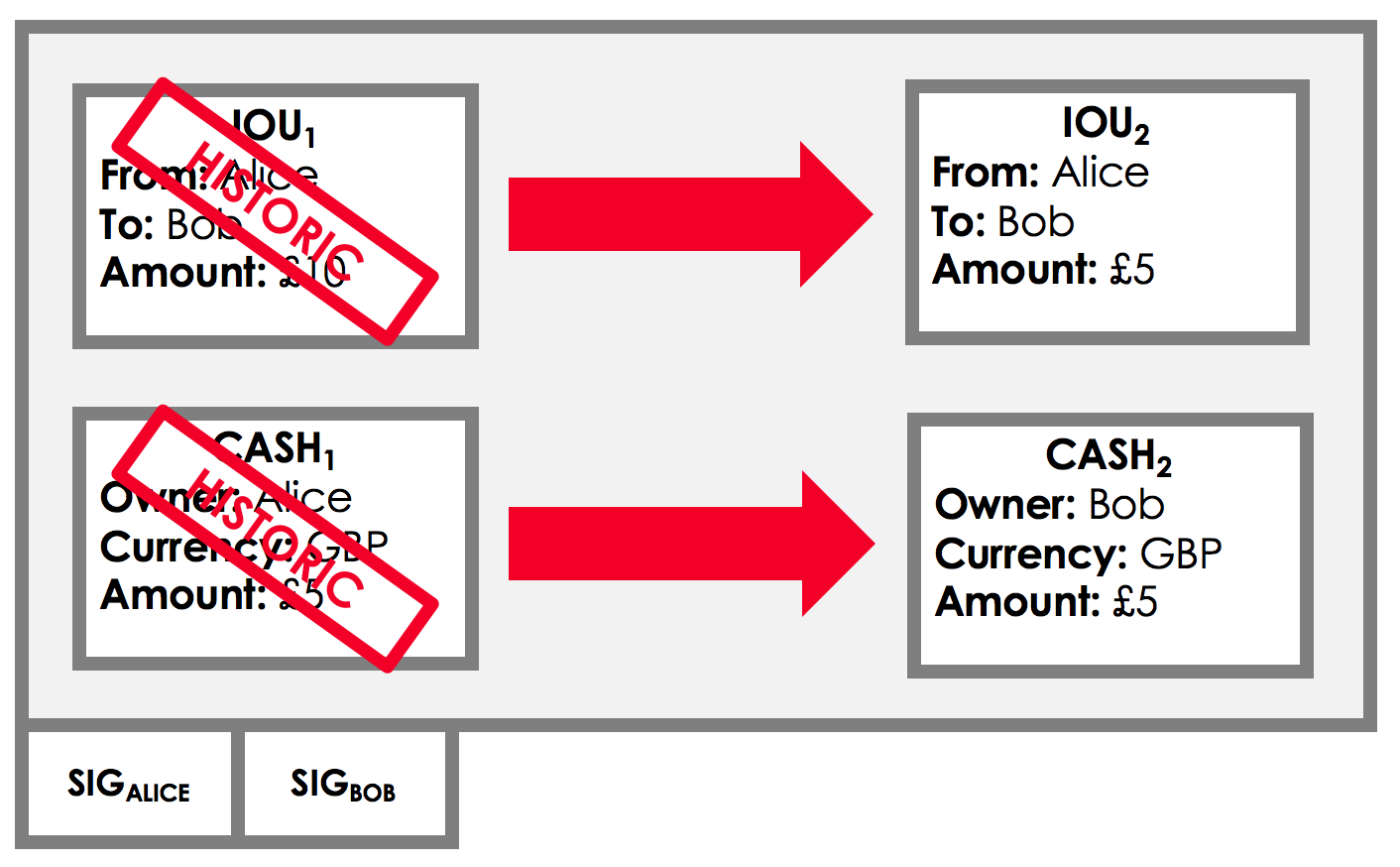 Each required signers should only sign the transaction if the following two conditions hold:

As mentioned in States, some states need to be referred to by the contracts of other input or output states but not updated/consumed. This is where reference states come in. When a state is added to the references list of a transaction, instead of the inputs or outputs list, then it is treated as a reference state. There are two important differences between regular states and reference states:

As well as input states and output states, transactions contain:

For example, suppose we have a transaction where Alice uses a £5 cash payment to pay off £5 of an IOU with Bob. This transaction has two supporting attachments and will only be notarised by NotaryClusterA if the notary pool receives it within the specified time-window. This transaction would look as follows: 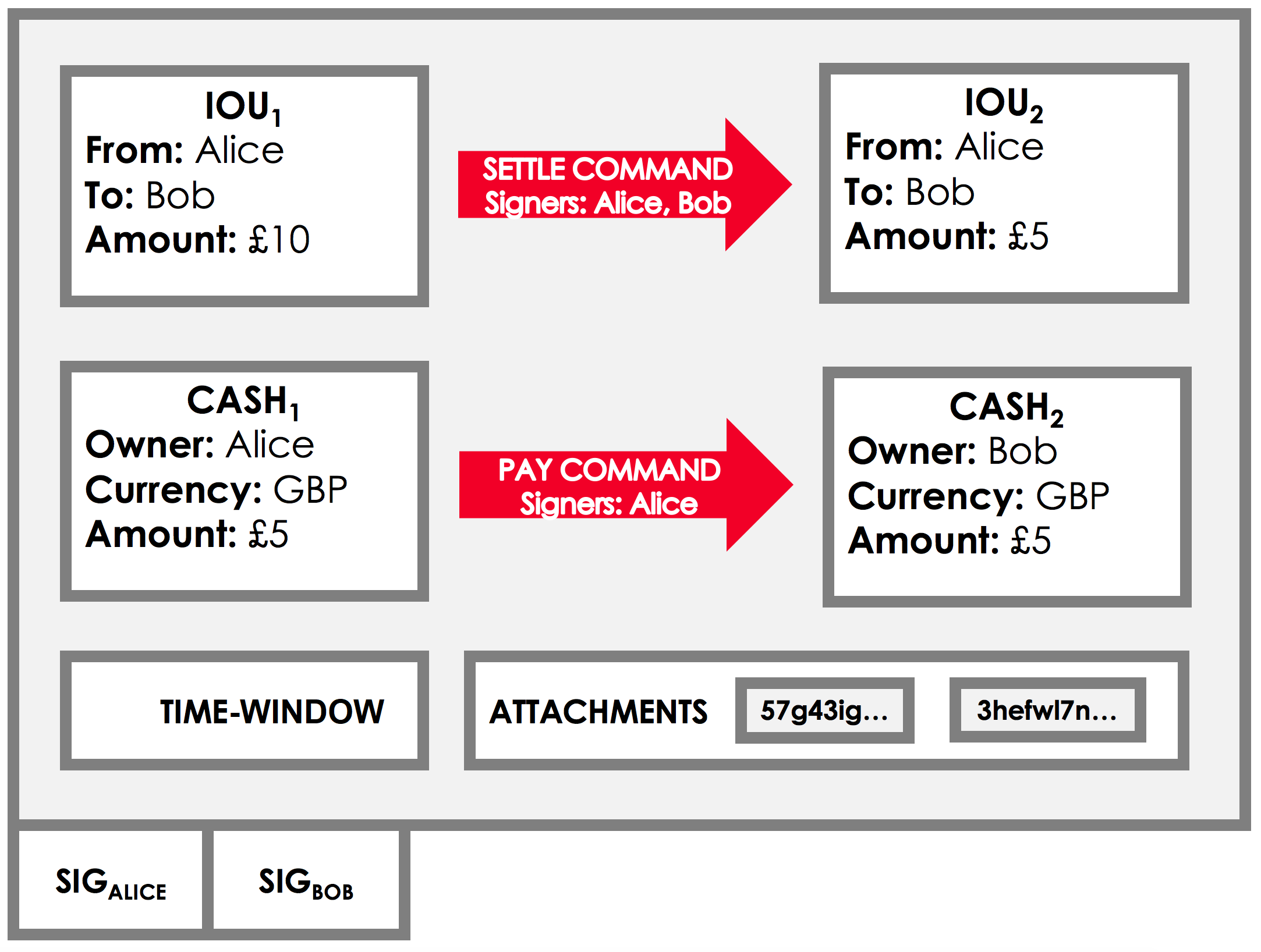 We explore the role played by the remaining transaction components below.

We can imagine that we’d want to impose different rules on what constitutes a valid transaction depending on whether this is a purchase or a coupon payment. For example, in the case of a purchase, we would require a change in the bond’s current owner, whereas in the case of a coupon payment, we would require that the ownership of the bond does not change.

Each command is also associated with a list of one or more signers. By taking the union of all the public keys listed in the commands, we get the list of the transaction’s required signers. In our example, we might imagine that:

We can visualize this situation as follows: 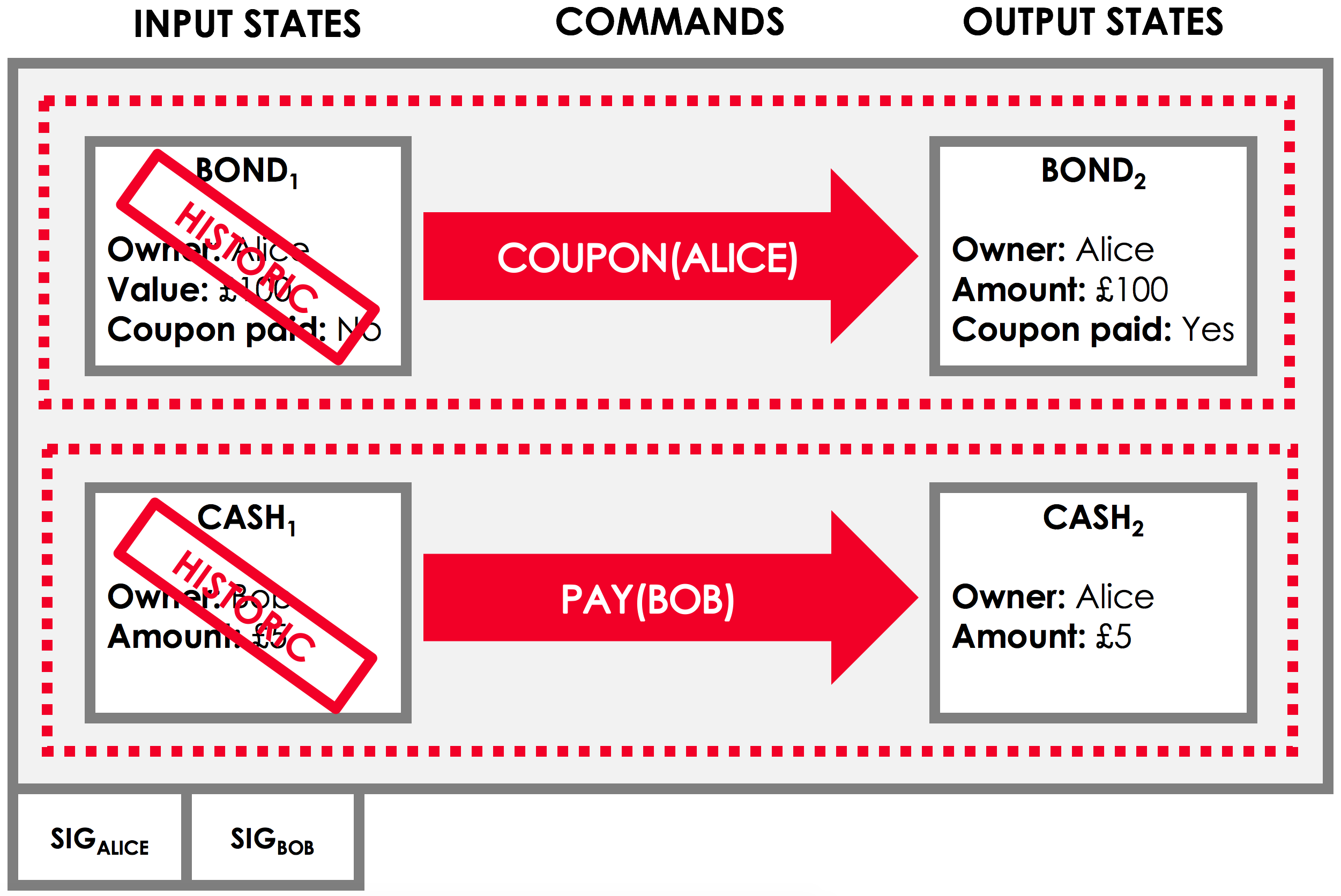 Sometimes, we have a large piece of data that can be reused across many different transactions. Some examples:

For this use case, we have attachments. Each transaction can refer to zero or more attachments by hash. These attachments are ZIP/JAR files containing arbitrary content. The information in these files can then be used when checking the transaction’s validity.

In some cases, we want a transaction proposed to only be approved during a certain time-window. For example:

A notary pool is a network service that provides uniqueness consensus by attesting that, for a given transaction, it has not already signed other transactions that consume any of the proposed transaction’s input states. The notary pool provides the point of finality in the system.

Note that if the notary entity is absent then the transaction is not notarised at all. This is intended for issuance/genesis transactions that don’t consume any other states and thus can’t double spend anything. For more information on the notary services, see Notaries.